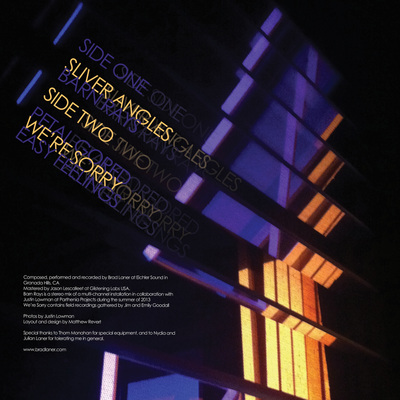 Sliver Angles is an audio LP by recording artist Brad Laner.  Front and back cover images are details of my work taken from the site installation Barn Rays at Parthenia Projects.

In the summer of 2013, Brad and I, along with performing artist, Oguri, produced a one-day event at Barn Rays, Parthenia Projects titled "Station."  Oriented around six different locations (stations) inside and out of the building, each station was an audio/visual constellation that Oguri interpreted through body movement.

One of the unexpected results of this collaboration was a stereo mix-down of the audio which appears on the record Sliver Angles as Barn Rays on Glistening Examples.
Next